One of my favorite berries, it took me a while to figure them out good enough to where I could actually explain a few things.

Pruning Raspberries seems easy yet there might be a few things one needs to understand about the difference between the summer-bearing and the ever-bearing raspberries.

Pruning summer-bearing raspberries are straightforward. You look at the canes in question, take out the ones that are grey with peeling bark. These are spent floricanes. The ones that are left are the primocanes, and they will fruit for you in the coming season. Now with these primocanes, take out the real thin and spindly canes, leave the strong and heavy or thick canes.

Pruning ever-bearing raspberries are a little different. The new canes that come up in the spring (primocanes) produce a crop on the tips in the fall. Then the following season, they will produce the first crop we are familiar with more towards the bottoms of the canes.

Let us go over the difference between summer-bearing and ever-bearing (sometimes called primocane bearing) raspberries. For the longest time, I always thought that the ever-bearing raspberries produced on the same cane in a season. I thought wrong.

Ever-bearing raspberry canes that emerge from the soil in the spring are called primocanes. They grow throughout the summer setting buds down low (this is where next summer's crop will be) that will remain dormant until the following season while the buds on top emerge and will produce a crop yet this fall.

Now the next season after the tips of the primocanes (first-year canes) fruited, the tops will be dead more or less because they already fruited, but the bottom 3/4 will be alive and growing and those buds are now on 2-year-old canes called floricanes that are preparing to fruit in the summer. After that, those canes can go bye-bye, but maybe wait until that winter/early spring to do that.

"Waiting till the late winter or early spring to prune out old canes will allow the canes to finish up transporting or sending back down the excess sugars, nutrients, and carbohydrates down to the roots to be used to support the next canes." This applies to all perennials that I am aware of.

The following season (the one-year-old primocanes which are now 2-year-old floricanes) these buds will branch out and this is where the fruit will be. Now after this is done, the cane will now die off and can be pruned out the following late winter or early spring.

Raspberry canes live two years and that is it. Get them thinned out to help increase light and airflow. Some folks prune off the tips of the floricanes because they can get tall. Be careful here because that is where your fruit is going to be. You do not want to head back the floricanes so much that you are pruning off all the raspberries you could be harvesting. I believe one can get good production when you understand how the raspberry works. 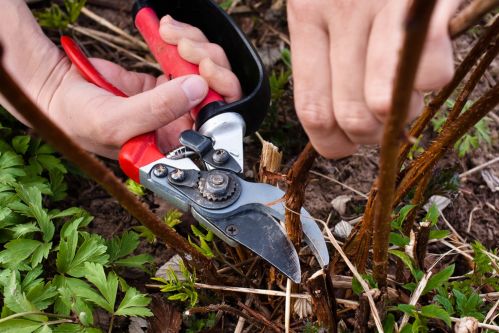 How To Hang A Swarm Trap

How To Melt Wax Foundation Into Layens Frame