Even the most experienced Ribes growers (gooseberries and currants) have an opinion of what their favorite is and what they cannot stand about another -- there are no shared opinions.

One friend of mine had been working off a grant along with the University of MN and had over a dozen cultivars. Seems like there was something wrong with every one of them at one time or another. Weather playing a big factor here, I think. Another grower that is close by who grows them to sell at markets said, "This one kind is ok but the three others going to rip out and plant something else."

My take, you want currants, you are going to have to see what works.

We will start growing the Consort Back Currant and the Jostaberry (which is a cross between the Gooseberry and the Black Currant). Jostaberry is a product of Germany that was too vegetative for my taste, but I believe their place is between the fruit trees and they did finally win me over.

Where to Plant Currants

I get asked about growing currants near Black Walnut trees every so often. I bring this up is because I think you should know that currants do fairly well near the Black Walnut. They do good when planted within range of an Oak tree too.

What I have in our original block of the orchard is the currant bushes planted within the rows between the fruit trees. Doesn't matter which, apple, pear, cherry, etc. They seem to out-compete the grass, even though sometimes it might seem the grass is out-competing the currants.

In one area, I had planted two cultivars of currants that are from Germany. The following year after I had planted them, the grass and weeds had been a good 2-3 feet over and above the currant bushes. Yet when we took a hand sickle to knock this vegetation back, the currants were doing surprisingly well.

They tolerate some shade, so I suspect the two other things were soil and water that they had to compete for. The soil is quite heavy, fertile, and moisture is typically not an issue here.

Currants do well in containers too, but they will depend on you a lot more. The containers will need to be protected from drying out during the wintertime. 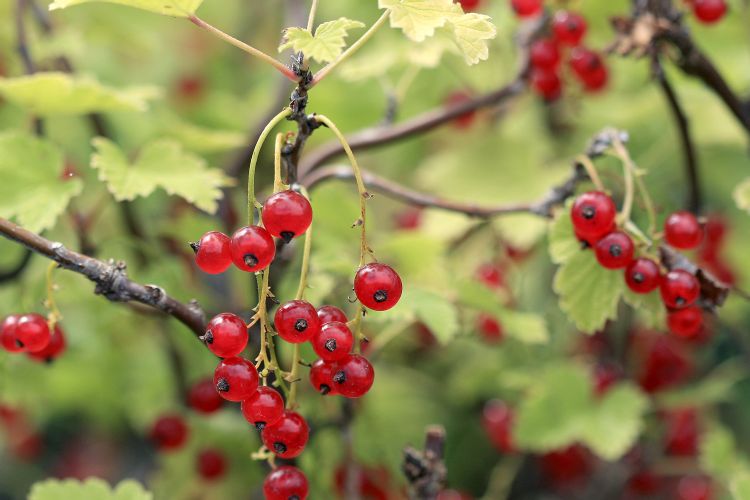